Christie made his statements at the Thomas Edison EnergySmart Charter School on Cortelyous Lane, after touring the school with its principal, Oguz Yildiz. Christie visited the school on the 20th anniversary of the enactment of legislation providing for charter schools in the state.

During his tour, Christie was told of the accomplishments of the school’s robotics team, as well as individual accomplishments by students in academic competitions and on standardized tests.

Christie praised the school, its teachers and its students, noting that TEECS will move from its current, temporary home at Oak Crest Day Camp into a larger facility on Pierce Street.

The move, Christie said, “will provide you with an opportunity to expand to a K-12 school” and expand its technology offerings. TEECS is currently a K-8 school.

“You are inspiring the development of more cutting-edge classrooms in New Jersey,” he told school administration. “That you’ve been able to do this in a temporary facility is a testament” to the skill of the faculty, he said.

Noting that TEECS is a Tier 1 school – the highest rating that can be achieved – Christie said that “this kind of achievement is what we want to replicate in charter schools and traditional public schools throughout the state. 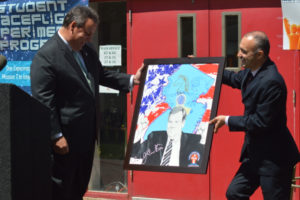 During his visit, Christie was presented with a painting done of him by a TEECS staff member.

Charter schools, Christie said, “are providing a lifeline for students and their families who are trapped in low-performing school districts.”

“What we need to understand is that every child has extraordinary God-given potential, and it’s our job to maximize that God-given potential, and when we settle for failed traditional public schools we settle for less for those families and to me that’s immoral, and so we have to provide more options and better examples so that students can find whatever their dream is inside the walls of classrooms like the one I just walked through,” he said.

Christie said the state will continue to work with “great schools” like TEECS to provide models for other schools in the state to follow.

“Thank you for setting such an extraordinary example,” Christie said.

TEECS is one of two Somerset County based charter schools – Central Jersey College Prep Charter School being the other – and both are located in the township. A group comprised of the Oak Crest Day Camp management team and a township resident who in 2005 won the television reality series/game show “The Apprentice” has submitted an application for a third charter school to be located in Franklin.

The proposed Ailanthus Charter School would take over the premises now occupied by TEECS and would draw students from Franklin and New Brunswick, according to its application. The township Board of Education has formally opposed the school, saying that the two existing schools already divert more than $9 million in taxes and that a third school would be a financial hardship on the district.

Christie did not address the pending charter school applications in his remarks – other than to say his administration will continue to support charter schools – and he did not take questions after his remarks. But a former township mayor who was in the audience, Somerset County Freeholder Brian Levine, said he supports charter schools, so long as they provide a good education.

Regarding the district’s concern that too many tax dollars were being siphoned off by charter schools, Levine said, “like all of us, if you have to shore up your house a little bit to cover it, i.e. the school district and administration, then I think that’s what they have to do.”