SOMERSET, NJ – A third grader from Franklin Township rallied her friends and family to donate $300 to help get bulletproof vests for police officers.

Meghna Sankar, a 9-year-old from Franklin Township, choose to forgo presents for her birthday this year and instead asked for donations for the police department.

Shankar and her friends raised $236 and her parents contributed an additional $64 to make it an even $300. The money she raised was donated to the Franklin Township Police Department’s bulletproof vest fund. 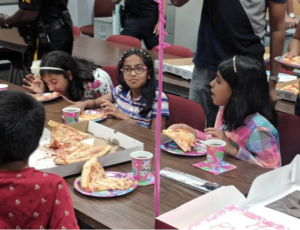 “We have five officers coming out of the academy on Friday, so I’m sure they’re going to be very thankful for all the support,” Grammar said. “She’s a remarkable young lady.” 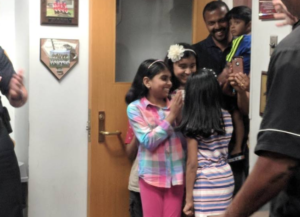 To thank Sankar and her friends, the police department and PBA 154 threw a surprise party at police headquarters on Wednesday for the children and gave them a tour of the building.

Officers gathered in a conference room and when Sankar walked in, they sang her “Happy Birthday” accompanied by bagpipes.

The kids — and officers — shared pizza and ice cream cake to celebrate the selflessness of the young woman. 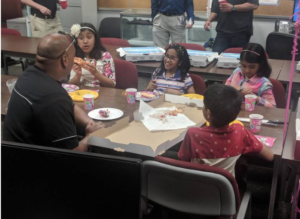 After her parents asked if she would rather donate money instead of getting presents on her birthday, Sankar decided to raise money for the police department on her own.

Sankar’s mother, Priyauakshmi Mohandas, said that her appreciation for the department came after officers gave her a 7/11 gift card for wearing her helmet while riding her bike.

“Every birthday party is just a lot of toys,” said Visakh Sankar, Meghna’s father. “So this time we asked her if she wants to consider instead of getting toys to help somebody.”

While the third grader wants to be a teacher — it’s her little brother who is obsessed with police cars — she nonetheless chose to raise money to help protect Franklin’s officers.

“You’re an inspiration to all of us,” said Mayor Phillip Kramer. “If everyone in the community could be like you it’d be so much better.”

To read the news as a pdf: Document 3