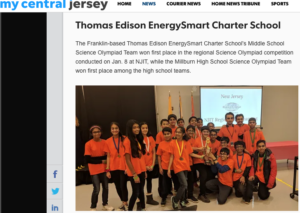 Nearly 700 middle and high school students on 44 teams from throughout the state competed in 25 hands-on events at the 13th Annual New Jersey Science Olympiad at NJIT.

The event, held Jan. 8 and hosted by the University’s Center for Pre-College Programs (CPCP), challenged participants in a range of activities related to science, technology, engineering and math (STEM).

NJIT (New Jersey Institute of Technology) professors and students, along with representatives from UPS, Stryker and Merck, served as event supervisors and volunteers for the competition, which culminated in an awards ceremony in the Campus Center Ballroom.

“For hundreds of students with an interest in STEM, the NJSO provides a fun day of team competition,” said Suzanne Berliner Heyman, director for program operations and outreach at the Center for Pre-College Programs, which coordinates the NJSO. “It also introduces them to NJIT and its prominent professors, which we hope further spurs their interest in STEM.”

The STEM activities tested minds, promoted teamwork and fostered fun, all at the same time  — and all over campus. The 44 student teams from throughout the Garden State competed in more than 25 hands-on competitions called “events,” which test skills on an array of subjects from anatomy and physiology to experimental design and geological mapping. With coaching from their science teachers, the teams worked on their projects in NJIT classrooms.

Some of the 2019 NJSO competitions include “Boomilever” in which teams design and build a boomilever to support a minimum load and achieve the highest structural efficiency; “Disease Detective” in which teams use investigative skills in the scientific study of disease, injury, health and disability in populations or groups of people; “Experimental Design” in which teams teams are given a set of unknown objects to design, conduct, analyze and write up an experiment;

“Mystery Architecture” in which teams are given materials such as paper cups, drinking straws, paper clips, string, tape, paper, thumbtacks and craft sticks to design and build a device like a tower, bridge or cantilever and “Roller Coaster” in which teams will design, build and test a roller coaster track to guide a vehicle using gravitational potential energy as its sole means of propulsion to travel as close as possible to a target time.

One of only 32 polytechnic universities in the United States, NJIT prepares undergraduate and graduate students and professionals to become leaders in the technology-dependent economy of the 21st century. For more information on the NJSO, go to njscienceolympiad.org.